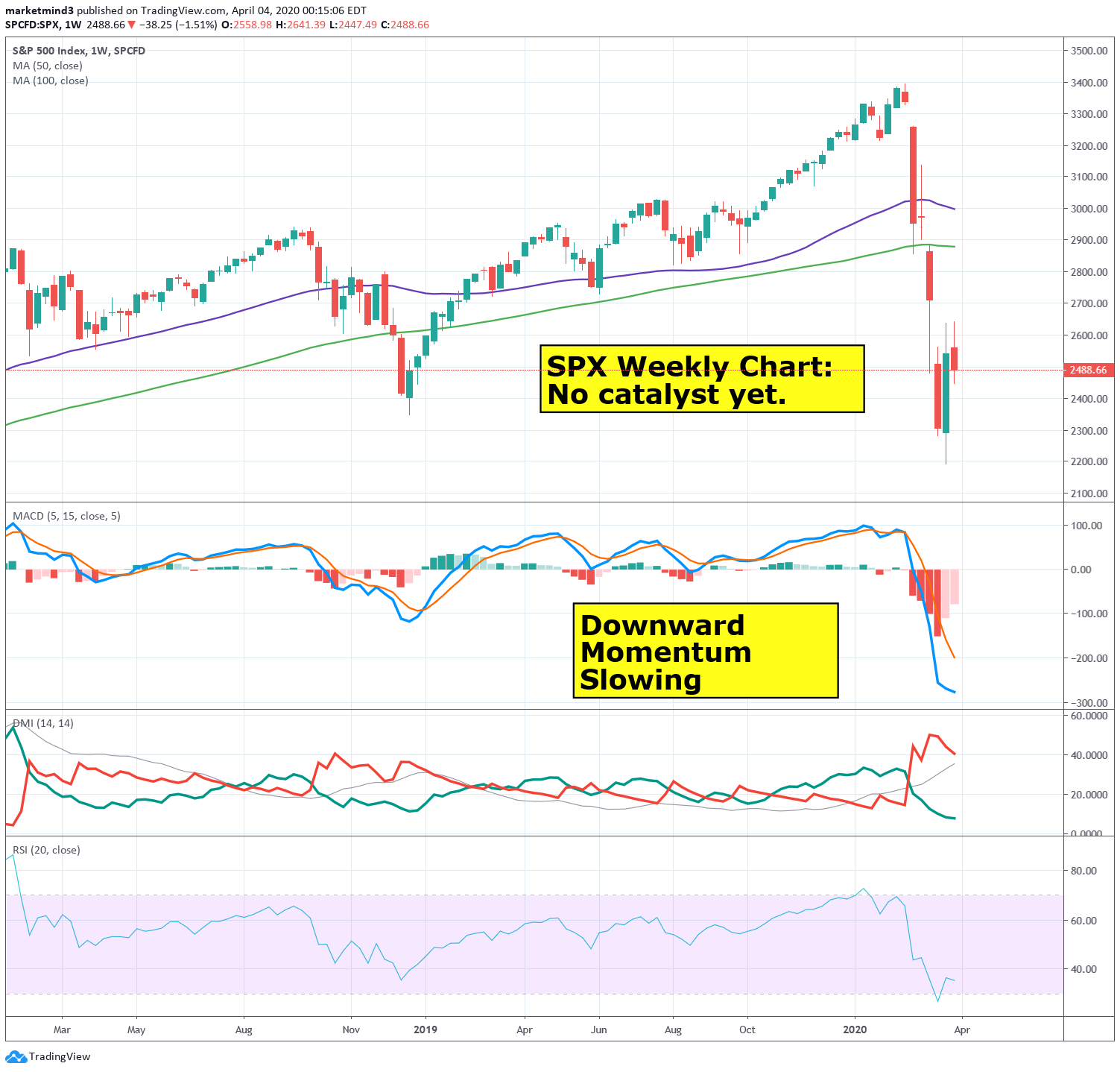 Stop me if you’ve heard this one.

COVID-19 is going to get worse than everyone is expecting. The economic data has yet to show all the damage. Earnings are about to reported and every company’s guidance will be miserable. The charts are turning down after a dead cat bounce. The market has to at least re-test the lows and/or crash to major new lows.

Did I miss anything? From what I could tell, that was pretty much the consensus among most “traders” on Twitter, and certainly among a lot of the comments sections.

Well, as usual the market doesn’t make it that easy. That’s why most people can’t make money trading – it’s hard to fight the urge to trade the obvious. There are times when clear chart patterns and logic work, and then there are other times when the market is setting a trap.

It was overall a quiet week for me. I posted a little less on Twitter. I almost went the whole week without trading at all. This should be the norm in such a volatile environment. I’m sure I’m not the only person many of you follow, and I can bet a lot of the most active traders were getting blown out of levels and trades all week. Or if they did trade, they were daytrading and taking very quick profits – a style of trading that most people can’t do.

I made one small long trade at the end of the week. I’ll probably take profits on that quickly and get back to the sidelines. We’re still in a very mixed environment, with an equal amount of bullish and bearish signs on the charts.

Sentiment feels too bearish to me. More specifically, it seems like the overwhelming consensus is that we’re either in a bear market and huge new lows are coming, or we will rebound, but not before coming down to retest the lows.

Either way, I feel like there’s an over-eagerness to short this rally. That’s part of the reason why most of my trades in recent weeks have been quick hit long trades.

Quick summary of where I see the charts:

Monthly charts: Bearish, but hitting some extreme oversold levels
Weekly charts – Bearish, but very tough to short since we’re in week 6 of a down move
Daily charts: Changing every day

The weekly charts are important, which is why I post them at the top every week. It’s just very hard for me to try too many shorts if the weekly charts are so extended to the downside. I’d ideally want a lazy rally back up that turns alleviates the oversold conditions. Clearly, that will take time. Which again reiterates my point – the next really good, multi-week move may take time to set up.

I talk a lot about my line in the sand. It’s a level where I get decisively bullish or bearish in my trading bias. Right now it sits at 2,730.

Be clear what that means – if the SPX can close above 2,730, I will become bullish in my trading bias.

I can guarantee you that many other analysts and traders are watching that level in a completely different way. Many are targeting higher levels like that as spots to short for the impending next wave down.

In my view though, if the bear market is alive, it shouldn’t be able to close above significant resistances. It shouldn’t have technicals and momentum turn bullish. So it would be a definitively bullish signal for at least a multi-week, tradeable rally.

I may not be buying right there, but would be watching for set-ups and pullbacks. It would make for some nice set-ups I think. Dips can be bought, with stops set that wouldn’t risk too much downside.

Greed is a dangerous thing when trading. Greed and ego I think is the overwhelming driver for why everyone wants to go short. They love that feeling of catching that big move down. They love the idea that they’re being so unique and smarter than the masses.

The easy short was back in January, February. Today it’s much trickier.

That said, we’re not there yet. As usual, my view, and any good trader’s view, should be fluid in this environment, and could change on a dime. Stay flexible.