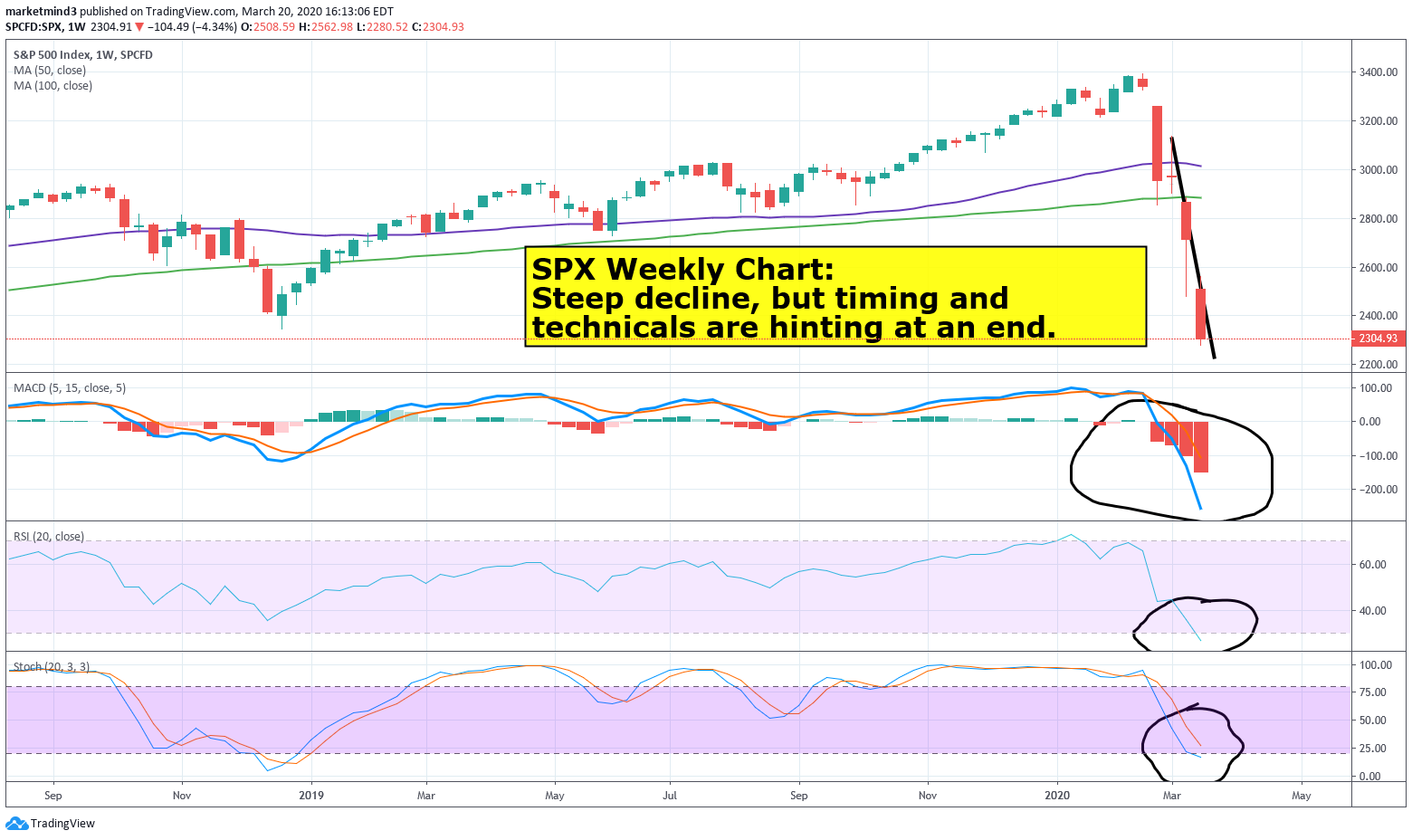 Are we there yet?

With every new low, every trader’s itchy trigger finger gets more and more anxious. Bullish or bearish, everyone seems to be looking for at least a short-term bounce. And as usual, with everyone watching the same things, the market keeps ambushing them with surprises.

I’ll repeat what I’ve said for weeks – this is a dangerous market that most traders shouldn’t be playing in. We have all year, and many years after that, to trade and use tools that have worked historically. This is a market where normal tools don’t work. Even though I’ve been able to navigate it reasonably well, I’ve had to adjust how I look at my usually trusty indicators and trade a little more on instinct. Not exactly a consistent way to make money.

I’m sitting on a small long position, built up over the last few days. Like with many of the bets, I’ve kept them small enough that I can live with taking losses, especially on the options. Long-time readers know how often I preach sizing your bets as one of the most important parts of trading.

Don’t worry, I see the same things you’re seeing about nationwide shutdowns, corona cases threatening to spike into the 100,000s and even millions. There’s a human part of me that can’t help being influenced by the headlines, but there’s a trader part of me that views things very differently.

If you go back and read all of my e-mails from the past year, you’ll see a consistency in my trading style. I went short In January and February when all the news was good and every basic chart pointed higher, and bought the dips last year on every negative trade war headline or Iran war threat. This is the art of weighing sentiment and charts.

My bets during this crash have been small, quick and mostly profitable. Despite bring in the middle of a historic decline, I have made only long bets since February 14 and have made money on almost every one.

For the first time in weeks though, we have the charts beginning to line up for a rally that lasts longer than a day.

Sticking to my basic trading rule of thumb, 4-6 weeks into a MACD signal is when I start to look for signs of a reversal. We just completed week 5 of a monster MACD down move, so timing is getting close. It’s also lining up with weekly RSI and stochastics oversold signals.

I have no emotion on this bet – there’s no magic support level I think we’ve hit, I have no opinion on whether we get a quick dead cat bounce, or it’s THE bottom, or whatever. I’m trading only what I see in front of me, and will play it by ear. If I see a decent risk-reward bet, I block out the noise and take a shot. If it’s a loser, I won’t be stubborn – I’ll take my loss and move on to the next one.

I do notice that there are a large number of Twitter traders in the last few days putting out 2,200, 2,000 and 1,800 SPX price targets. It’s become a little too popular an idea that the market needs one last capitulation move down. That doesn’t mean they’ll be wrong, but as usual, when I’m long I like it when the crowd is looking lower.